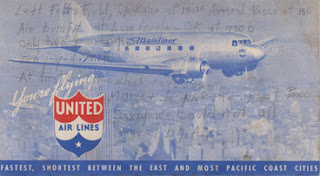 United Airlines Flight from Felts Field, Spokane, Washington to Pasco, Washington on July 6, 1937
Since the airlines have been gradually going to the electronic kiosk the ticket jacket is fast becoming a thing of the past along with a good airline meal.
The featured ticket jacket from United Airlines in 1937 highlights the memory of a flight that took place approximately 75 years ago.
The flight that a Mr.  Finch took so impressed him that he wrote his observations on his ticket jacket and kept the paper/cardboard eating utensils that he used for that meal.
Mr. Finch comments on the ticket jacket are as follows:
Left Felts Field Spokane at 12:35.  Arrived Pasco at 1:30.  Air bumpy at low levels – Ok at 9,700 feet.
Enjoyed the trip.  At first – somewhat nervous.   Marie and Jo pick (ed) me up at Pasco.  Sorry we could not all travel by air.
The flight lasted 55 minutes according to the times provided by Mr. Finch.
By looking at the meal that was served on that short flight of approximately 100 air miles he would need all that time to eat the below meal as detailed inside the ticket jacket.
Meal as follows:
Butter Bun
Sandwich – Brown Bn Meat
Fried Chicken – 3 pieces
Celery
Fruit Salad
Potato Chips
Jelly
Mints
Good Coffee – 2 Cups
Served by hostess at 9,700 feet elevation
Good, Yum-Yum

Next time you are flying on a short flight and are enjoying your soda and bag of peanuts think back to Mr. Finch on his 55 minute flight from Spokane to Pasco.
Posted by airliner49 at 9:17 PM No comments:

Welcome to Airline Ticket Jackets Blog.  This site is as a source of information and entertainment for those interested in airline ticket jackets.

Ticket jackets from the 1920's to present will be posted here as well as information on the airline.

Drop me a line and let me know what you would like to see on these pages.

This site is a forum to open a dialog with those interested in ticket jackets.